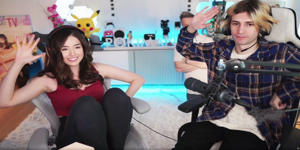 Popular Twitch streamer Felix “xQc” Lengyel criticizes Pokimane amid gambling stream drama that continues to unfold despite the platform announcing a ban for most forms of that type of content. Only two days removed from Twitch confirming that most gambling streams will end, the repercussions of the crusade continue to cause statements from major livestreamers on the platform.

Pokimane is among several Twitch streamers like Asmongold, HasanAbi, and Mizkif that have been vocal in recent months about how toxic gambling streams are to the community. Gambling content is something xQc had dabbled in with past streams, something that became more frequent with a Stake brand deal which has incentivized more slots. Although he’s always stayed active in the gaming community as well, xQc has been a defender of gambling on Twitch, and he thinks that some livestreamers don’t actually care and are clout-chasing.

Prior to Twitch’s announcement about the end of gambling streams, Pokimane began trending with a tweet that has been liked by over 318,000 people which may have been heard by higher-ups given the swift ban news. When asked by a viewer during a September 21 livestream if he thinks that Pokimane is against gambling streams for clout, popular Twitch streamer xQc stated “mostly yeah,” before clarifying that she’s successful enough on the platform to have inside sources she can reach out to privately rather than making things public. Pointing out that Pokimane could easily call or text someone at Twitch about the gambling content, xQc suggested that no major streamers cared about these streams until it became a public sentiment.

Adding to his clout-chasing speculation of Pokimane, xQc hinted that she watched a close friend of hers do gambling content at the same time she spoke out against such livestreams without mentioning her friend’s name. According to xQc, Pokimane went hard at two of Twitch’s biggest gambling streamers while actively watching the aforementioned friend bet money of their own in front of a live audience. Twitch’s xQc isn’t alone in defending gambling streams from other content creators, Trainwrecks sparked an additional conversation when he accused OTK founder Mizkif of covering up sexual assault in his tweets about the situation.

Although many viewers took to the clip of xQc calling out Pokimane to express their doubt or agreement with the former Overwatch pro, others have kept up on recent Twitch community trends to see what potential drama may surface next. While he may continue to maintain his success on Twitch, some fans also pointed out that xQc stands to lose money with the prohibition of many types of gambling streams effective October 18.