This week Twitch has made a few policy announcements with some changes to how the platform runs. First, was banning Twitch gambling streamers that have been the root of so much controversy lately. The ban has been widely greeted as a rare good move from Twitch, going down considerably better than their recent change to monetization. However, some streamers aren’t happy. Gambling streamers are facing a loss of their entire channel’s hook. 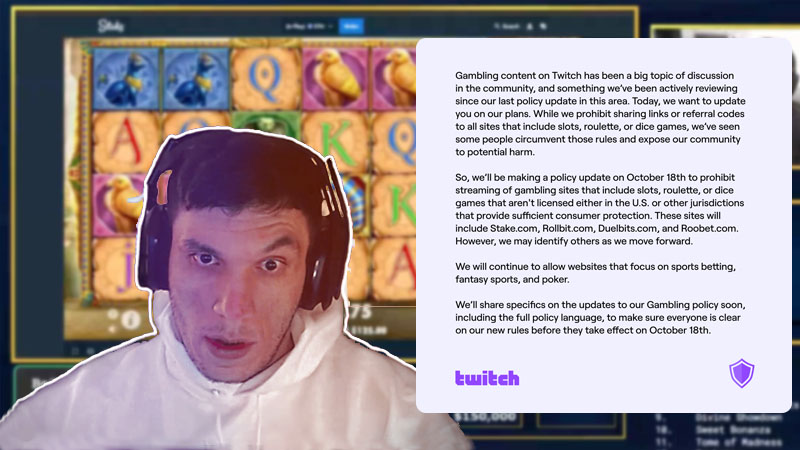 This is what the reaction from the Twitch gambling streamers has been, and why there’s so much disagreement about this move.

The new changes to the Twitch terms of service are going to be cutting down on gambling schemes. They’re not specifically banning all streams, but a few gambling streamers haven’t reacted so well. Trainwreck in particular.

The streamer has been embroiled with controversy lately involving Mizkif and even xQc. In the midst of this, gambling streams were banned following the Sliker scam coming to light.

Trainwreck has been one of the most popular streamers in gambling content and he’s come to the defence of the idea of gambling on stream recently. His main problem with the decision is that it allows sports betting and only focuses on slots, blackjack, and roulette. He specifically focused on the Sliker problem. That streamer had been addicted to sports betting. Not the type of gambling that is typically streamed.

That was Trainwreck’s initial reaction to the changes. However, he’s gone further since. He now claims the only reason behind the technicalities of the ban is Twitch’s other interests in sports. Followed by his further escalation, calling Twitch as a whole extremely corrupt, and that the gambling ban doesn’t have anything to do with gambling. 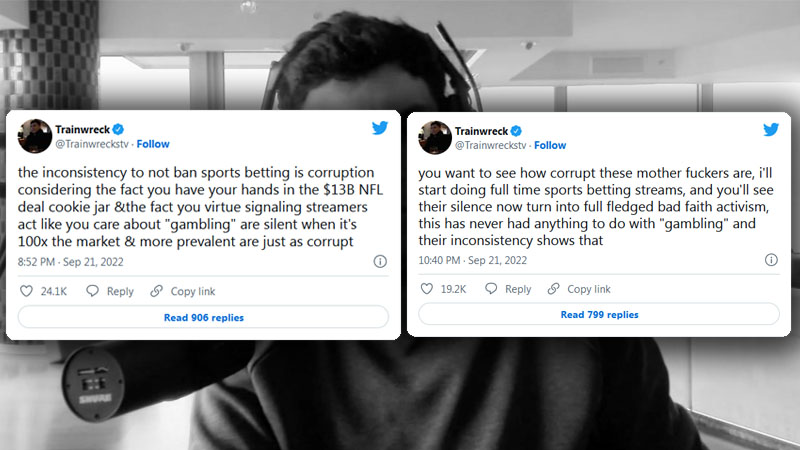 He (Trainwreck) is one of the top streamers on the platform. He’ll likely have to reposition his stream with these changes. Oher gambling streamers have even put the blame on other content creators, seemingly for trying to stop gambling streams.

Twitch has a Karen and that Karen is Pokimane.

Twitch has not fully banned gambling

One interesting part of all this is that Twitch hasn’t even banned gambling. Their announcement so far only isolated a few specific betting sites. Otherwise, they are only going to be banning platforms that they don’t consider to be safe. Those with inadequate licensing. This is a vague rule. It definitely cuts down on the sponsored streams.

It’s possible such harsh reactions from gambling streamers are specifically because of a loss of a lucrative sponsorship. xQc’s sponsored streams with the now banned Stake.com resulted in over $100 million being gambled. While some gambling is still allowed, removing this is probably going to sting.

The reaction from gambling streamers so far has been harsh. Even with some forms of gambling allowed on Twitch, they aren’t taking it so well. It’s rare that a change to Twitch is well received by the community, but this one largely has been with most saying this is a move in the right direction. Although, the reactions from Twitch gambling streamers show not everyone is always going to be happy.