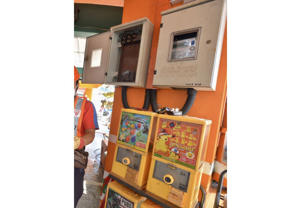 © Provided by The Star Online

MELAKA: Electricity supply to 10 premises used for gambling in Melaka Tengah has been disconnected by Tenaga Nasional Berhad with the assistance of the police during an operation carried out from 10am to 5pm, here on Thursday (Sept 22).

Melaka Tengah police chief Assistant Commissioner Christopher Patit said no arrests were made during the operation since the premises were empty.

“The premises were operating under the pretext of legal businesses like cellphone shops, restaurants and phone service providers. The premises also were equipped with closed circuit TV (CCTV) to detect the presence of authorities.

“The front entrance of some premises were closed but had back entrances to allow clients to come in and gamble,” he said in a statement, here on Friday (Sept 23).

Christopher said all the premises raided were properties that were rented.

“Inform the authorities if any premises were carrying out suspicious activities. Premises owners must also be aware of the type of business carried out by their tenants.

“They will end up with problems if their premises are used for illegal activities like illegal gambling,” he said. – Bernama